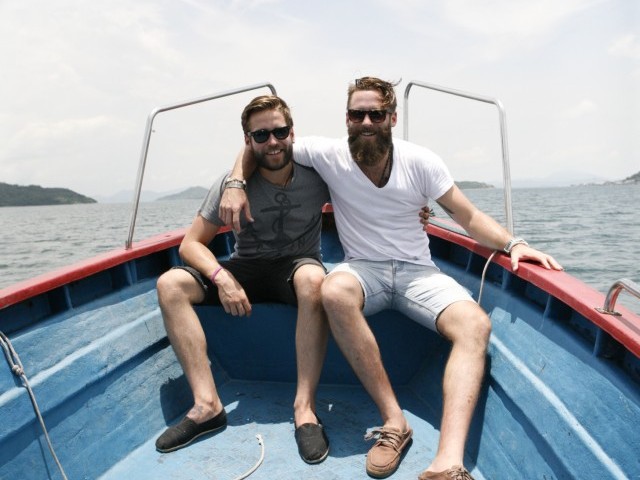 Part two of the bearded adventures of chef Dylan Benoit, this time he has travelled from Hong Kong to Macau with his brother, read the rest of his journey. 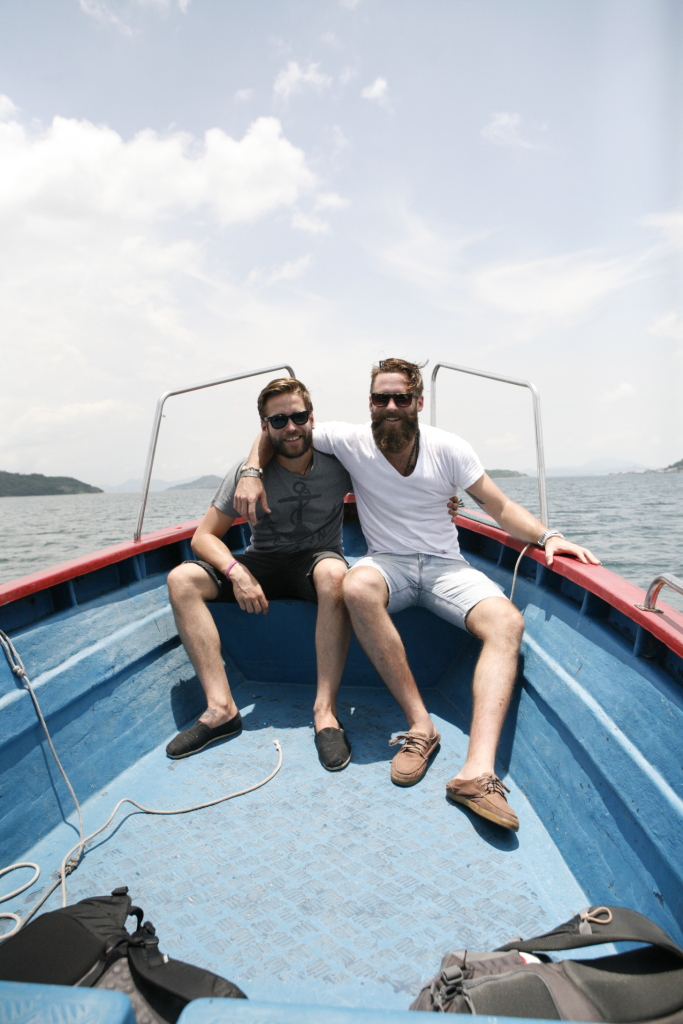 This would be the first day since we arrived in Hong Kong that we didn’t have dim sum for breakfast, and my brother Lucas was visibly annoyed with me that I was disrupting his 5 day dim sum streak. However I promised him dim sum for dinner at Tim Ho Wan, the worlds first Michelin Star dim sum restaurant, located in Kowloon Bay and I also assured him the dumplings we were going to have for lunch were worth the cross-boarder mission. The plan was to leave hong kong, clear customs, hitch a ride to Macau, clear customs there, grab some lunch and return in time for dinner. We got on the ferry around noon, a little later than we were aiming for. Hong Kong has a way of keeping you up at night, so we had a bit of a late start.

After a 45 minute ferry ride east across the south china sea, the skyline of Macau became  visable long before we reached its shores. Massive sky scrapers, hotels that look like they belong on the set of Aladdin as well as bridges and skyways shooting in every direction. Macau is an Island of excess in the middle of the ocean, dubbed “Vegas of the Orient” it is a truly magnificent place to behold, much like Vegas but in a league all of its own. Formerly a Portuguese colony, Macau is now considered a “Special Administrative Region of the Peoples Republic of China” just like Hong Kong, which means China watches their back but Macau keeps its own police, legal system, monetary authority, as well as customs and immigration policies. You notice the European influence immediately in the older architecture, colonial style buildings and churches and all the road signs are written in Portuguese, Cantonese and English. 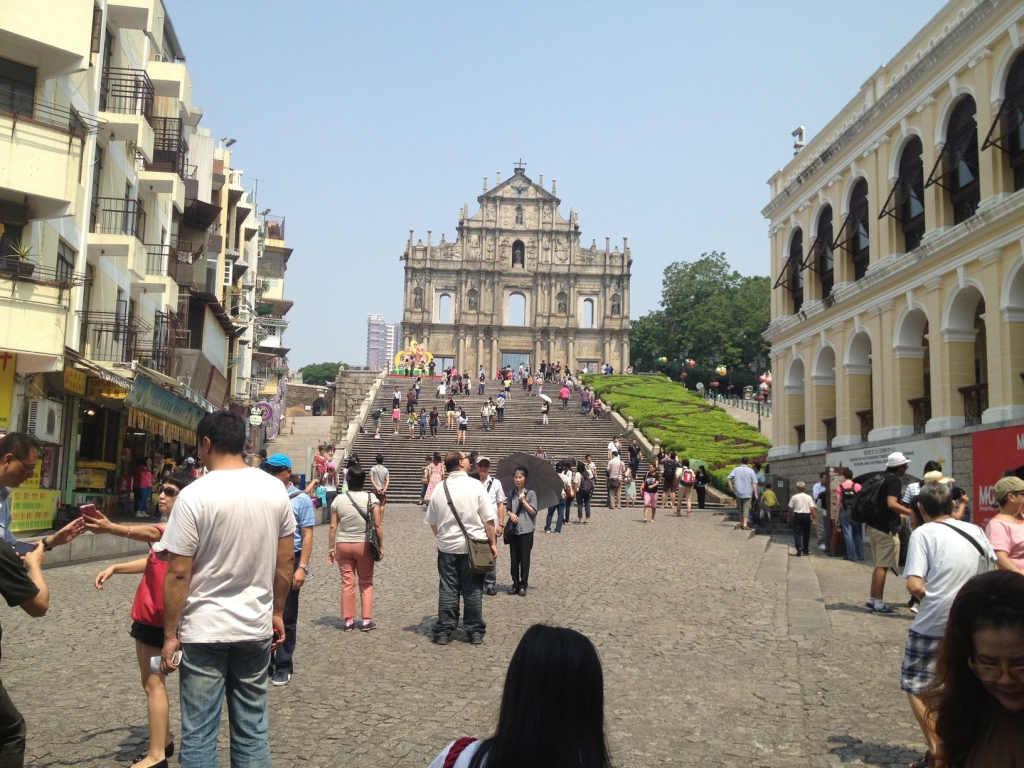 Armed with nothing but a vague recollection of the area and a photo of the storefront that was still on my phone from the previous trip, we hit the streets trying to find the small alleyway off a pedestrian side road that was home to the dumpling shop. We wandered around taking in the sights, sounds and smells while hundreds of tourists shopped for Gucci purses, IWC watches and Versace dresses, carrying countless bags through the streets dodging Bentlys, taxis and Ferraris at every corner

As you walk the streets the aroma of bak kwa (dried meat), emanating from the storefronts is mouthwatering and unmistakable. This dehydrated meat product is the oriental cousin of jerky, it is sweet and salty, usually made from beef, pork or mutton. In basic bak kwa the meat is finely chopped and seasoned with salt, sugar, spices, and soy sauce then dried, but there are numerous stores dedicated to bak kwa, and countless flavours, and we were hell bent on trying them all. 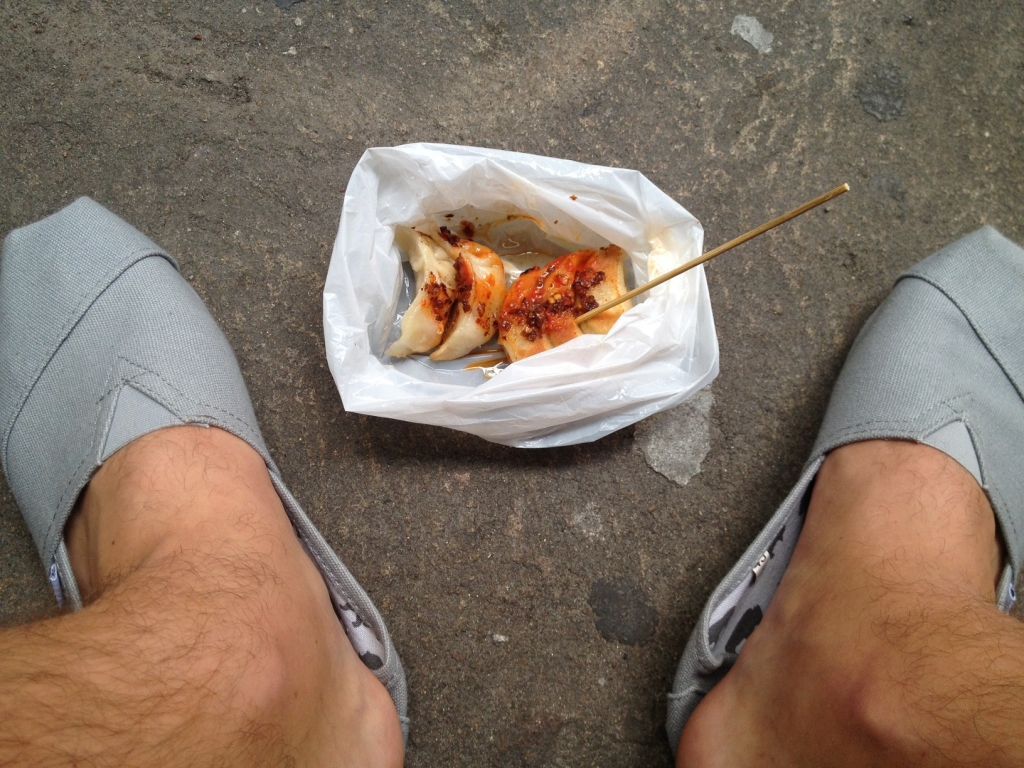 After sampling around 30 kinds with no intention of buying any to take with us, the gentleman behind the counter of this particular shop chased us out of his store shaking his fist in the air. Apparently he didn’t take kindly to us trying every single sample, so we carried on but our amuse bouche just got us salivating for more. We walked in circles until we came across a recognizable landmark, an old Church façade I had seen on my previous trip. This church sat atop a hill and was beautifully haunting with no walls or roof, just a front with a small monument behind it. surrounded by perfectly manicured hedges and beautiful flowers, I asked Luc if he wanted to climb the stairs to see it.

“see what?” he asked

we consult a map of the area which proved futile. Luckily after years of traveling I have managed to turn off the voice in my head that says “you’re a man, you don’t need directions” and we asked a store clerk standing outside his bicycle repair shop where we might find these delicious dumplings. Between the hand motions of scooping food into our mouths and showing him the photo on my phone, he unenthusiastically points to his left up the hill, says something indistinguishable under his breath and went inside. The trail isn’t cold after all! We wander around the corner and down the cobblestone road, checking every alley and side street on either side. We walked past one alley that looked very narrow and dark, didn’t look familiar so without missing a step we keep on walking then BAM!! Like a boxer coming back to consciousness when his coach gives him smelling salts, we were lambasted with the aroma of onions and fried dough, complete olfactory overload and we spun on our heels. Across the street and back one alley was the dumpling shop, big green sign and white letters barely illuminated in the day time sun, it read “Loja de Comidas Sio Seong Hoi” 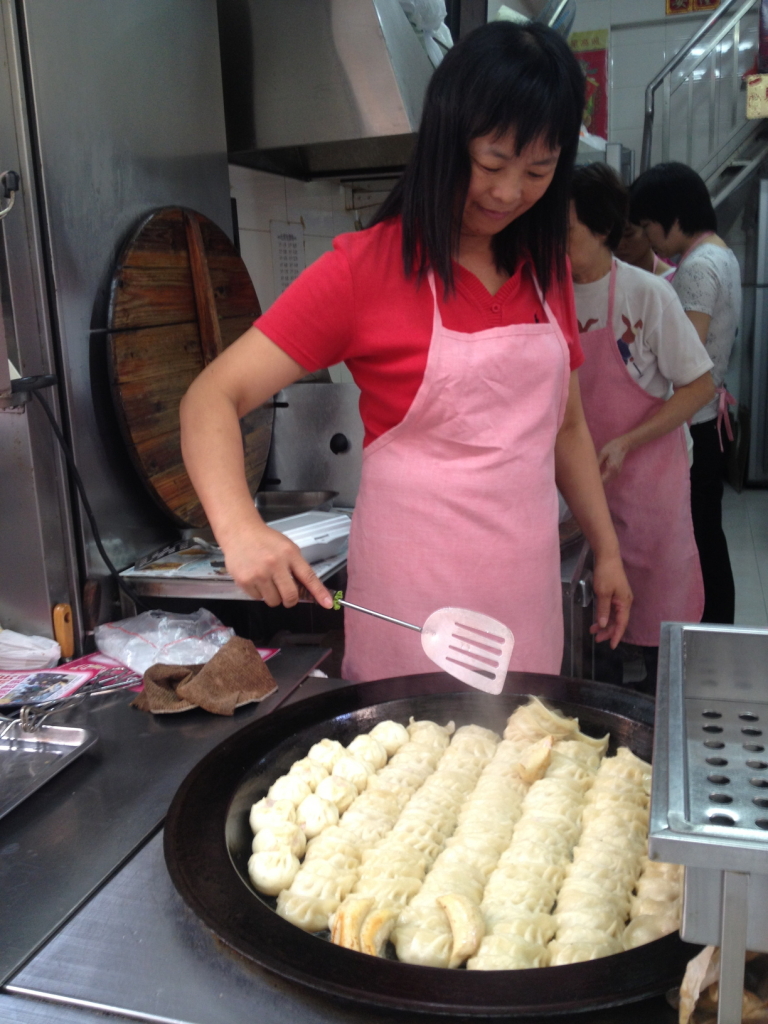 My mouth was watered instantly. This “mom & pop shop” is merely a roll up corrugated metal door with a counter in front. On the counter, 2 large steel plates around 3 feet in diameter, used to sear the dumplings to gold brown perfection. Like most places on our travels, the menu is limited to a few items they do really well. Not knowing what the menu says, we just point to the dumplings in the metal plate and signal for 2 orders. 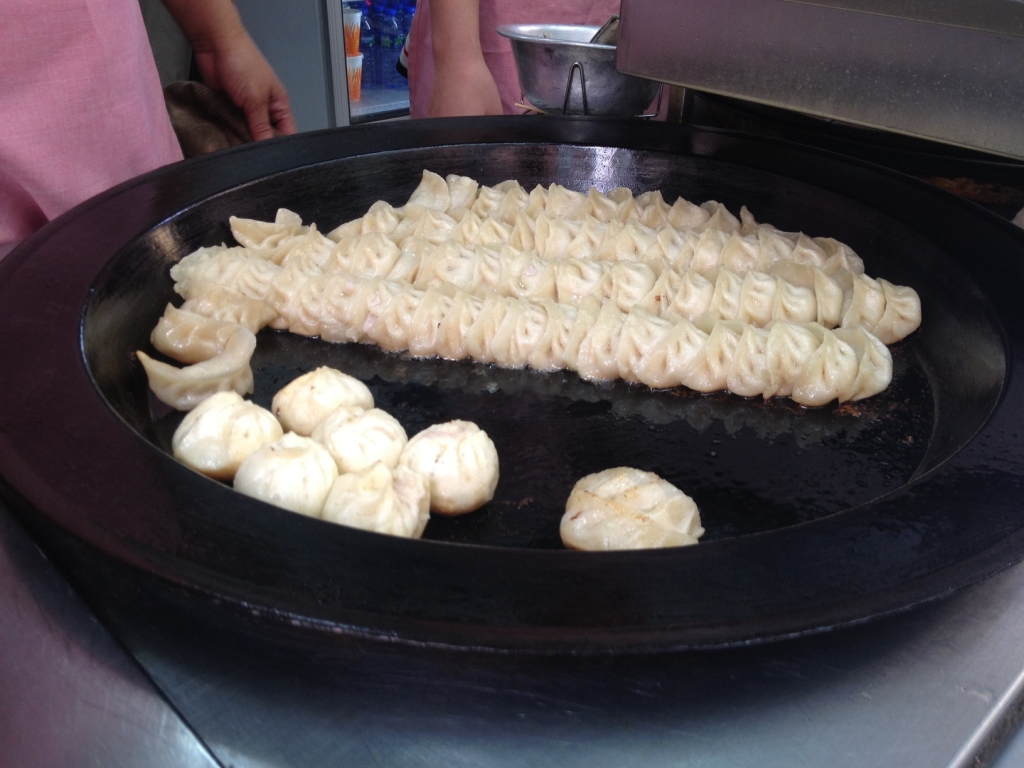 The dumplings are quite small, about two bites each, or one bite if you’re my brother. They are hand made from the most delicate flour dough and stuffed with roughly chopped pork perfectly spiced and seasoned. They are then boiled until cooked and pan fried to order, as if to torture you with the aroma before you are allowed to eat them. There are no plates here, no knives, no forks, no tables, no chairs. The middle aged woman with short black hair flipping the dumplings puts three pieces in a small white plastic bag, pierces one with a bamboo skewer and hands it across the counter to me. To the left on the counter is a small metal container containing a delicious roasted chili paste. As was showed to me by previous tour guide Chad, I show Lucas the drill. Place desired amount of chili pasted in the bag with the dumplings, twist the bag up and shake to evenly coat dumplings in chili. Untwist and enjoy. Pretty simple, insanely delicious.

We sit on a small curb running the length of the building next to the shop and devour 3 dumplings each very quickly, so we order another three and a couple pieces of scallion and sesame fritters. These too we golden brown and salty, the dough so moist and buttery like a non-flakey croissant. The scallion and toasted sesame seed creating a depth of flavour one might not imagine possible in something so simple as a fritter, accentuated by the lingering heat from another completely unique chili paste. The taste, the smell, the location and company all combining to create another amazing dining experience, one Lucas and I won’t soon forget.

Time check, its just after 3:00 and we have less than an hour and a half until our ferry leaves, just enough time to hit The Sands Casino to see if Lady Luck would be on our side.