In part 1 of our 2 part series, we take a closer look at the deadlift technique and insane genetics of the Guinness World Record deadlifter Eddie Hall.

“My life revolves around World’s Strongest Man. I want to be the World’s Strongest Man.” – says Eddie Hall, who has managed to deadlift 500kg sticking to the official “strongman” rules. Even though he is still young (28 years old), the bearded beast doesn’t plan to remain focused only on Strongman alone. He comes off as a very down-to-earth guy who knows what he’s capable of, and wants to conquer much more. As the only athlete who has managed to deadlift that amount of weight, his success now draws the attention of many inside and outside the world of weightlifting. And the all keep asking the same thing: how did Eddie do it? What kind of diet plan and training routines does he practice? What can we learn from the man who’s currently “the one”?

The Champion’s Looks and Strengths 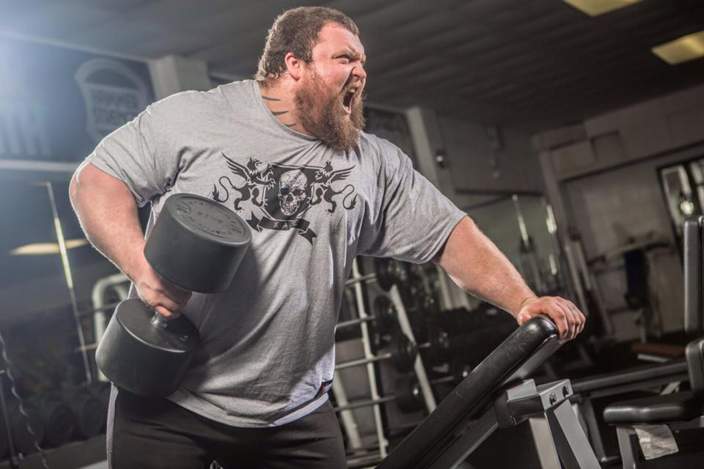 Eddie is quite the big man (6ft 3ins) and weighs in at 29st (aiming to get to 30st – 190kg). He says that his natural weight would be about 17st, but is aware of the fact that he has to be big in order to accomplish his goals, as well as the undeniable fact that Mother Nature didn’t design the human body to be quite that size. He wears 5XL clothes and has dedicated the past 5 years of his lifts to extreme training. His daily food intake provides him with a staggering 10,000 calories (4 times the recommended daily allowance). He has meals every two hours, and eats about 1kg of meat for lunch alone. He also consumes protein shakes and carb drinks, lots of fruits and nuts, eggs, vegetables, pasta, cheese, and digs into protein bars before sleep.

Hall has underwent a five hour testing at Staffordshire University, where tests have shown that he can rev up the same amount of power as a 1.2 liter Vauxhall Corsa in each of his legs. While squat-lifting 150kg eight times, he has managed to recover straight away from a 132bpm heart rate, meaning that he is in possession of an astonishing cardiovascular physiology.

In order to manage to lift this amount of weight, the world’s strongest beardman has a body with no weak links. Alongside lifting weights, he regularly does his cardio, because a decent amount of basic fitness is needed for one to use one’s strength properly. Before getting into lifting weights, he actually started as a swimmer. Swimming doesn’t hurt your joints, keeps you mobile, and it works your shoulders, and is thus ideal for a strongman. Grounding in another sport makes building a lot easier, because it gives you some basic muscles to work with.

Eddie’s deadlift is not much different than yours or mine. As for the starting position, his is more vertical, but still correct. When we also take into consideration different limb lengths, a more rounded-back, and a wider stance, we can conclude that it would be incorrect to try to match his back angle or stance width. Lifting lighter weights, while forcing a deadlift to look a certain way, builds lousy habits that won’t work when lifting a maximal weight. Instead of copying Eddie’s lifts, try learning the principles of his lifting and apply them to your own.

There are certain checkpoints that both us and Eddie will end up hitting while performing a maximal-effort deadlift:

As for back position, other deadlifters start their deadlifts with their back rounded. They don’t want to risk disturbing the bar path by curling under the load, but start rounded and lock the spine in that position. Some people start with a vertical back, but it all depends on the length of the limbs and the aforementioned checkpoints. Lower back rounding should be avoided as a rule. If Eddie decided to approach the weight with his back flat, he would have to lean further forward and raise his hips higher, because he can’t change the position of the bar nor his spine length. In that case, his back would have to do more work, which would probably mean a failed lift, because his back is already working hard just to keep him in one piece.

As for general strength trainees and novice lifters, starting with a flat back is recommended for strengthening it, as well as getting a flat, rigid upper back. Eddie Hall doesn’t want to get stronger in general. He aims to find ways that will allow him to lift the greatest possible weight.

There is more to the deadlift than meets the eye, however. To learn more about the powerhouse that is Eddie Hall, don’t miss the upcoming part of this article…