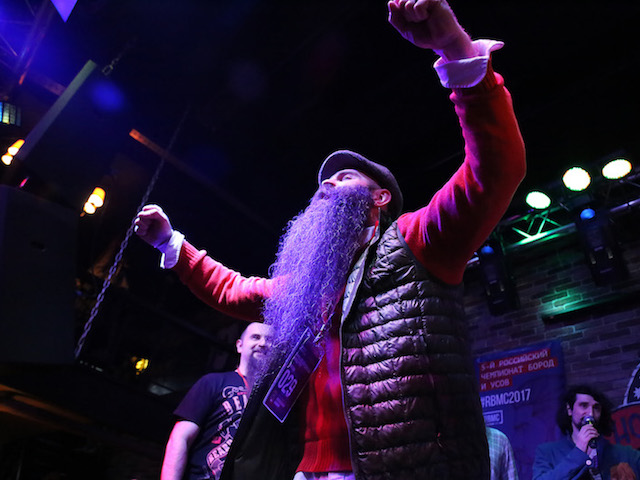 On April 8, Moscow hosted The 5th Annual Russian Beard and Mustache Championships. The best beards and mustaches gathered from all over the country. This year the competition attracted 113 participants from Russia, Belarus, and even the U.S. Russian participants travelled to Moscow from as far away as Khabarovsk, 7 time zones away.

The championship has been held annually since 2013. The competition is organized and presented by the Russian beard community, Borodatyh.net. It was held on the weekend closest to what can be translated as Day of the Beard or Beard Day, which occurs on April 6th. This holiday celebrates the day that Catherine the Great abolished the tax on beards, which had been imposed by her predecessor Peter the Great.

In addition to the competition itself, the event hosted a market for beard care products, an exhibition of portraits from bearded artist, Nikolai Ryndin, and even an auction of a beard made completely of chocolate. The entire event was streamed live on the internet.

In 2017, the judicial committee welcomed the first female judge. Traditionally, the judges are the best barbers in the country and for the first time in the championship’s history, there was a female barber among the judges. Elizabeth Sokolova is considered by many as the best barber in Moscow. She was assisted by barbers Artem Apachek and Alexander Korneyev.

The competition was fierce. Participants came seriously prepared – not only were beards and mustaches primped, combed, conditioned, and presented, but many came in full costumes to complement their particular follicular style. Among the contestants this year one could find Einstein, a few mountain climbers, a Russian boyar, Poseidon, a painter, a pilot, and many others.

It was not the first time that Nikita Usik was the main star of the competition. This year, Nikita took first place in the Freestyle category. He constructed his beard into a complex design reminiscent of a starfish or octopus.

This year, in the Fake Beard category, young Kostya Impine took the prize with a beard he constructed from Legos. Another participant created her beard from chocolate. After she competed, the chocolate beard was auctioned off.

Winners of the championship received trophies and an annual supply of beard care products.

Last year, in addition to the main ten categories was a competition for the softest beard. This year, the additional category was Longest Beard. This was won by Mikhail Bortsov whose beard reached 47 centimeters.

Founded in 2005, Borodatyh.net is the oldest beard community in Russia. April 6, 2013 the Borodatyh.net community organized and held the First Russian Beard and Mustache Championship. The goal of the community is to gather beards, revive and encourage beard art, and introduce Russian beards and mustaches to the global stage.

On October 3, 2015, Beard Team Russia, created by the founders of the Borodatyh.net community, took part in the World Beard and Mustache Championships in Austria for the first time in history. Today the team consists of seven bearded and mustachioed men.

Check out some more photos from the competition below.