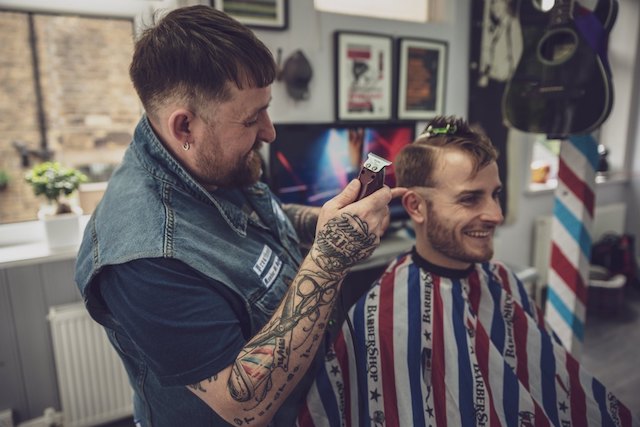 We caught up with Stu Wallwork-Walsh, the West Yorkshire barber who loves the social aspect of the industry and the importance of a strong barbering team.

Tell us a little bit more about yourself and how you started in the barber industry?

I started out as a hairdresser. Did a fair few years after my training was completed too. I did a haircut one time on a bloke. He wanted a classic Manchester indie cut. I gave him what he asked for and he loved it. I however didn’t. I wasn’t quite happy with the result. Something wasn’t sitting right with me about it. So I decided it was time to go and get some more experience in gents hair.

Unfortunately at college the gents hair section was just kinda breezed over, and not much was put into it. So I had to take it back to basics. I got a job in a £5 walk in and wait joint, and that was me set. Jesus I actually learnt how to blend a #1 in watching the woman who would be my interviewer do a few of them while I waited. Funny to think back. Just sold her a dream and they didn’t even trade test me.

What barbershop are you currently working at?

I work at a brand new place in Ripponden, West Yorkshire called Baht ‘at (pronounced Bartat) it runs exclusively by appointment only. You can book online at www.Bahtatchopshop.com or we have an app you can download on both the App Store, and Google Play. Just search for ‘Baht ‘at’.

What’s your favourite thing about working there?

It’s my shop. It’s the first one I’ve opened. I’m free from tyranny, and don’t have to put up with bullshit bosses telling you how to do your job, ripping you off for money, or failing to keep to empty promises. Might sound a bit passive aggressive, but it’s the truth. I’ve seen small companies do everything right, and I’ve seen massive companies who should have known better do everything wrong.

I even worked at a place where the owner would come in and take £300 from the safe on a Saturday for his weekend spends. Ridiculous! I’ve had a lot of experience, and the best thing about where I am now is I can put all that together and build my own team and do it correctly!

What do you love most about being a barber?

People! Straight up, people. I love people. I love talking to folk and finding out about them. I love talking full stop. So I’m in the right job really. I also love the responsibility that’s in front of you. Some people might see it as just cutting hair, but   It’s not. Getting the chance to put an extra step in someone’s day is a really great feeling.

Waking up in the morning and thinking “I’m going to nail every single cut today” and then doing it. I’ve got a Saturday lad called Jack who wants to train up too, so passing on the knowledge to him is also brilliant. I just love being a barber. I feel very blessed to have a vocation in life.

Do you have a favourite cut?

I gave up barbering for 4 years. 2013 I decided to see if there was anything else out there for me. There wasn’t!!!

So I came back. When I did the whole barbering industry had changed. When I left no one had zero back and sides. It was classed as a Chavy/Scally haircut. I get back in 2017 and skin fades are the new big thing. So I quite like doing fades. I like the straight fringe cropped look with a skin fade too. Kinda a mix of an indie look with a chavy look. I like the contrast.

Coming form a hairdressing background though I’m still fond of my scissor work. It’s not always about fading. So I love classic cuts. It’s also something I think a lot of these young bucks are slacking with.

How do you think the barber industry is changing?

I’ve seen a massive change in the 4 year period I had out. I’ve seen the middle classes start taking a bit more influence from the more urban side of society. Coming from a council estate rearing I like seeing that contrast. Classic shaves were just becoming mainstream again when I took my time out. They seem to have fell off in popularity again now. I like that though. Was never a fan of them. It’s a great experience n that, but the result I found was never as good as a Mac 3 shave at home.

I’ve had shaves from some of the best in the industry too. Just never the same. It’s not even a service I offer in my shop. I like making money, but I’m not in the habit of taking money where it’s not warranted. I also understand this not going to be a popular opinion, but if barbers are truly honest about it, they know I’m right.

Where do you see barbering in 5 years time?

It’s becoming a more reputable career option now and less of “just a barber” mentality going on. With that comes progression. With progression comes more focus. I’m hoping that focus is thrust towards eduction. When I trained as a hairdresser they didn’t focus on gents haircuts that much, and it was very much just brushed over. Granted that was a long time ago, but I know of people in hairdressing training right now, and when it comes to barbering they just throw on some videos.

More needs to be done about this. Luckily people like Lee Stafford are looking into making positive change. With the help of talented people with the reach and platform that a Lee Stafford has things can go in a really great direction. I’m actually of the opinion that every barber should be a hairdresser at some point. You look at the work the Josh Lamonaca is putting out and the future is looking more like ‘Gents Hairdressing’ than ‘Traditional Barbering’

What’s the best barber team you have been part of?

Before I answer that I have to take this opportunity to give special mentions to a few of the major influences on my career.

First is Helen Bradley. What this lady doesn’t know about the hairdressing business ain’t worth knowing. She has run an amazing salon called Macleod Bradley for over 20 years now. That salon brought me to the end of my training and gave me the confidence to believe in myself and my skill set, and not to believe in brass rings or glass ceilings. She also taught me that sometimes in business you have to make tough decisions and 100% have stand up for what you believe in.

It made us but heads on a fair few occasions as I was young and put these methods in to practise in the wrong manner, (for which I’m sorry Bradders) but it’s these teachings that I’ll be taking forward with me and building my brand.

Second is Lynette Macleod. Wow! One of the best pure hairdressing talents I’ve ever  seen. End of story. I still don’t think I’ve seen anyone do it better yet, and I’ve been in this industry well over 20 years. I was

Lucky enough to be trained by Lynette as she was one of the founders with along with Helen at Macleod Bradly. On a daily basis I still use the things this amazing hairdresser taught me and probably will continue that way.

Lastly is Loomsy, Dave Looms. Much in the same way as Lynette a natural barber. He was on another level before that level was even created. He’s also one of the calmest people I’ve ever worked with. I worked with him at all levels of his career. Barber/Assistant Manager/Manager/and eventually director. His approach to management and direction is one of the finest I’ve been lucky enough to work with. He also taught me that and I quote ‘You can’t judge the way people react to your actions.’ Something I think we should all think about.

If I could put all three of these people into a team, that would be the best team I’d have worked with, but I can’t so…………It’s gota go to Steve’s Old School Barbers.

Barbering wise. I had total creative freedom. I worked with some awesome talent, what a team. We were the busiest barbers in that area. It was long hours and hard work, but it was great atmosphere to be in, and a platform to be the barber you wanted to be. Oh and I got to work with a girl called Dani who was easily four times better than me.

Ronnnniiiieeee. (In joke but she will giggle when she reads this) the picture is of us all on Christmas Eve where we were encouraged to get fancy dress. I’m in the middle dressed as Superman.

Got any tips for bearded men?

I’m a bearded dude myself and the lengths in mine goes from one extreme to the next. My care regime is simple. Beards are hair. Treat them like that. Wash and condition them like you would your hair. Get yourself a nice beard balm or oil, blow it dry. Put some effort in with your beard. It’s one of the first things people will see.

Come see a professional and get it trimmed every few weeks. That’s what we are here for.

What are some simple haircare rules that you think men and women should follow?

I’m not a shallow person one little bit, but do think hair is extremely important. Find a hair care professional you like, trust, and can afford to visit regularly. If they recommend professional products to you,  consider using them. We are not just after a bit of quick commission. We stock the products we use because they are amazing at what they do, and they are not as heavy on chemicals as some of the products found on the supermarket shelves. If the first ingredient in your product ain’t Aqua. Put it back on the shelf.

Lastly, if you could cut the hair of one celebrity, who would it be and why?

I spent most of my career in Manchester, so I’ve cut quite a few celebs and soap stars over the years. That’s always been quite cool. One of my current clients is the guitarist from Embrace, and new group EEVAH. Love talking music with him.

If I could choose one right now though it would have to be Liam Gallagher. I’m a South Manchester lad born and bred as is Liam. I’m also a massive Oasis fan they are my favourite band. He’s a style icon and beats to the sound of his own drum. I really respect that. Plus I’d give him a bangin’ classics Manchester cut. Them mod cuts are also one of my favourite cuts to do, so I’d be in my element.

Check out some more of Stu here…