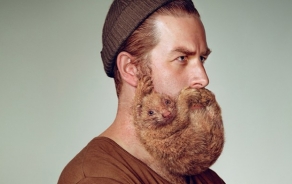 This writer is more used to writing about beards and sport, but I’m sure there will be places where comparisons can be made.

Ha! Look at him, how can you not love that face? He reminds me of a teenager that hasn’t started shaving yet and just has a fluffy moustache because he’s too shy to go and buy a razor. Surely the inspiration for Australian cricketer Merv Hughes? Or perhaps the other way around…

Your classic mountain goat, just climbing up sheer cliffs like it doesn’t care for ‘the man’ and his obsession with gravity. When it gets up there, it takes care to brush his chin beard and sideburns to keep them in top condition.

Here’s an Ibex inspiring the next generation, and looking uncannily like Norwich City’s Lewis Grabban.

The final caprine on the list is the markhor (No, I hadn’t heard of them either). Fantastic goatee blends into a shaggy neckbeard. Is it odd to say it’s almost sexy? Yeh… Yeh it is. Forget I said anything.

The first entry on the list with ‘beard’ in its name is the beloved Bearded Collie, one of our favourite dogs in the world. Lovely floppy moustache, with a little chin going on too.

Here’s a chap whose pint you wouldn’t want to spill in a busy pub. A bison would mess you up pretty badly, and who could blame it after we virtually wiped them out just for a laugh? Sport-beard-a-like must be Strongman Mark Felix.

Firstly, it’s not blue. Dog breeders will argue the point, but it’s just not is it? Anyway, a magnificent moustache and goatee combo makes it top dog.

One of the most bizarre moustaches in the animal kingdom belongs to this appropriately named porker. It’s tufty and unkempt, but you have to respect it for not caring about that and just letting it grow wild. Probably an animal that would complain that it had a beard way before all those hipsters did.

By far the smallest entry on the list in terms of body mass, but one of the most distinguished. This little tamarin shows off the greatest moustache of the animal kingdom, and looks like he’s spent a lot of time meditating over what that might mean philosophically.

And a surprise in at number one, the Sumatran Orang-utan. Dignified and stately with its ginger goatee, the orang-utan is effortlessly classy in exactly the same way that Sean Dyche isn’t. Goes to show bigger isn’t always better, sometimes simplicity wins out.