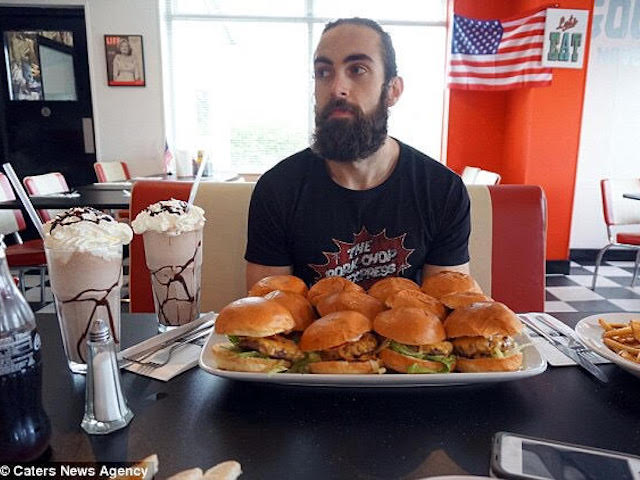 We caught up with Beard Meats Food, the alias of British competitive eater and YouTube entertainer Adam Moran.

Can you try to give our readers a bit of a background on yourself, a quick spill about things you are into?﻿

My name is Adam. I’m a 32-year-old YouTuber and 7th ranked independent competitive eater in the world. I eat…A lot…Whether it’s eating 15 Happy Meals for a YouTube video, or travelling the world competing in professional eating contests…I’m a gastronomic entertainer. And The UK’s finest I might add. 🙂

I go in fits and starts when it comes to beard care, because I’m lazy and I travel a lot. But for me, a good day of grooming would look like this: On waking, I’ll wash my beard, every day. The softer your beard hair the more you can get away with washing it less often, but mine is pretty coarse…Not to mention it gets covered in food frequently (to say I’m a messy eater is an understatement).

I’ll let it dry naturally, comb it out with a wooden beard comb (less likely to break your hard-earned chin shrubbery), then run some decent oil through it. If I’m making an effort I’ll put some beard balm on there too, which is like a light wax. Just to give it some shape.

Do you have any specific brands that you prefer?

Not really. I get a lot of stuff sent to me for free, but as a general rule I’ll just use stuff which is priced mid-range. There are a lot of beard grooming companies cropping up these days and I just tend to avoid the really cheap ones.

You don’t need to pay through the nose, but just as with hair products, you get what you pay for. So I’ll shell £10-12 on a decent beard oil and maybe £6 on a shampoo. Beard balm shouldn’t really be any more than £12 either.

Do you trim and maintain your beard on your own, or do you only let your barber handle it? Who is your ‘go to’ guy for trimming and maintenance?﻿

Lord no! My beard is more valuable than anything I own, so there’s only one man I trust to cut it, and that’s my barber Kieran at Lord’s Barbering in Leeds, West Yorkshire. I don’t have the length trimmed that often, as I kinda like the wild look. And if I need to go to a wedding or something, I’ll just have my girlfriend tie it up and put a nice beard clip/ring in there so it looks a bit more dapper.

Kieran knows what I like, he’ll just shape the moustache up a bit as it grows faster than everything else, take out a few of the greys, and maybe shape it in just a little bit. Nothing too complicated.

So when did you learn that you could eat an insane amount of food?

I’ve always had a good appetite. I was overweight as a kid and loved food, but I didn’t really get into big eating until around 27-ish. I’m really into fitness and strength training, and I did this really long diet just to see how shredded I could get.

When I was done, the girlfriend just said to me, ‘I’ve seen this eating challenge at a place called Holy Moly’s Deep South Kitchen in York, we should go do it as like a treat’. So I did…And although I ate all the food, I didn’t do it within the 45 minute time limit. But, I got hooked. Started training to get better at eating (believe it or not you can), and before I knew it I’d started my YouTube channel, I was getting asked to do stuff for TV and invited to all kinds of places.

I went back to the same restaurant a couple of years later and reattempted that first man vs food style challenge and smashed it in 13 minutes (the first time took me over an hour) so it just shows how much you can improve.

How long have you been doing this?

5 years or so. It’s hard to pin point when I started. As a hobbyist I’d say yeah, around 5 years. But professionally, only about 18 months. It’s my actual job now. No fooling.

Who do you look up to most in the industry?

That’s tough to say because I really skirt two industries. YouTube and Competitive Eating. In terms of creating videos, I really look up to guys like Casey Neistat and Nathan Figueroa. They’re really great cinematographers and story tellers. Every one of their videos is like a mini-movie, so that’s where I’d love to be. I’m motivated most by entertaining people. Eating is kinda secondary to that.

In competitive eating, I’m most in awe of the greats like Takeru Kobayashi. That guy could eat 60 hot dogs complete with buns in 10 minutes! My favourite of all time has to be Pat Bertoletti though. He can swallow hamburgers whole. Total lunatic, but a really nice guy. I met him in New York in 2015 at The Battle of Big Eaters World Championships (kinda like a competitive eating world cup team event).

What was your hardest challenge to date?﻿

That’s a good question. I suppose it would be one that I’ve failed. And there aren’t many. I foolishly tried to eat the Guinness World Record biggest Christmas dinner ever last year at The George Pub & Grill in Stockton. Which, I think weighed like 23lb. I was never going to finish that, but I got a good 14lb into it, which still is pretty nuts, given most people’s stomach can only hold 2lb.

What is your favourite meal?﻿

I’m a big foodie, so it’s tough to pick a favourite meal, probably any authentic American style breakfast. I love sweet and savoury. Pancakes with bacon and maple syrup. French toast. Stuff like that.

How do you keep in shape after eating all those calories?

Hours and hours in the gym! There’s no real shortcut sadly. I’m fortunate though in that I love training. Always have. People are often shocked that I do very little cardio. I don’t run, I don’t swim or cycle. I just do a lot of heavy compound strength exercises. Bench press, deadlifts, squat, bent over row, chin ups.

That kinda thing. I’m not the biggest guy in the world, I only weigh 154lb. But what mass is on my body is mostly muscle. As a result, my metabolism works at a higher level than your average couch potato. My energy turnover is higher etc. So it’s just a combination of that, and eating healthily when I’m not eating like an idiot in a contest or something.

Any tips for our readers looking to get into competitive eating?

Don’t. No but seriously, I’d be apprehensive about encouraging anyone to do it as it can be dangerous if you don’t know what you’re doing. There’s no harm in taking on one of these eating challenges offered by restaurants to win a free meal though. To do that, it’s just usually a question of a bit of preparation.

Try weighing out say 5lb of salad (lettuce, tomatoes etc) and eating it in one sitting. It won’t be fun, but if you can work up to getting that amount of veggies down in under 30 minutes, you’ll probably be able to take down most of the food challenges out there!

Lastly, what new challenges are you looking to do next? We want to show our support

I’m really focused on competing now, as most challenges in restaurants are way too easy for me these days. We don’t have a lot of actual eating contests in Britain, and certainly no professional sanctioned leagues like in America and Japan etc.

So having done a few All Pro contests I’d really love to go out there more often and be known as pretty much the first elite British competitive eater ever to throw down with those guys. Compete at Nathan’s Famous Hot Dog Contest, which is televised on ESPN every 4th of July for example, or in Wing Bowl which is this huge event the weekend before Super Bowl every year, in front of a packed out stadium. That would be incredible!

Check out Adam on his social media here –