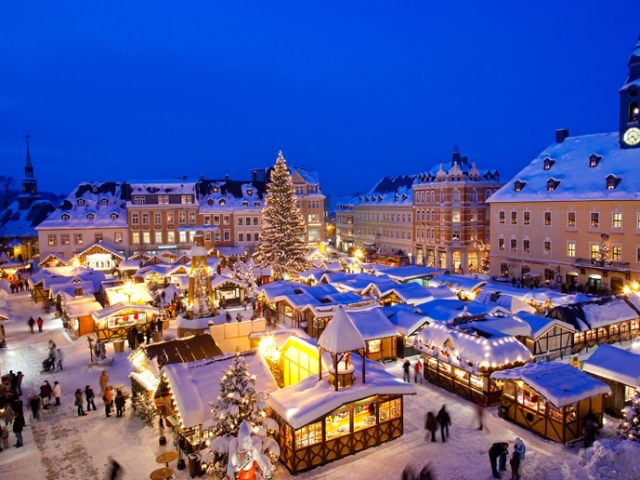 It’s bloody freezing and you’re feeling miserable and run down in the weeks around Christmas. What’s a person to do but take a quick trip away to a new city? Check out some of our festive recommendations.

If you’re clever and a bit sneaky, you might still be able to find a room for Edinburgh’s legendary Hogmanay celebrations (that’s New Year to those of you who’ve missed out on footage of thousands of  Scots dancing in the streets). From the warming if slightly dangerous torchlit procession through the city to the tradition of swimming in the River Forth, you can guarantee that New Year in Edinburgh will make you very, very cool in the office in January.

Check out some last minute deals for Edinburgh here

Perhaps not the most obvious Christmas destination, unless you remember that St Wenceslas lived in the Czech Republic, Prague is actually one of Europe’s top winter getaways – the Czech capital is famous for its Christmas markets, which run from the end of November to New Year’s Day. Old Town Square hosts a giant Christmas tree, while Wenceslas Square (there you go) is actually more of a boulevard to be strolled down while enjoying Czech beer or a hog roast. The markets are even open on Christmas Day, if your great aunt’s cheque – muahaha – is burning a hole in your chinos.

Check out some last minute deals for Prague here

You just winced, didn’t you. And that’s exactly why you should go: Paris is a beautiful city with amazing Instagram opportunities and more history than a weekend trip could ever comprehend. Don’t let megalomaniacs put you off taking your girlfriend on a romantic break in the City of Light (but maybe keep an eye on Foreign Office travel guidelines).

Check out some last minute deals for Paris here

I saw Strasbourg named ‘Capital of Christmas’ while researching this, and while the capital of most people’s Christmas is their mum’s kitchen at lunch time, Strasbourg is another market town perfect for a holiday getaway. Coincidentally the capital of the Alsace region of France, Strasbourg has apparently been holding a Christmas market since 1570. Held near Strasbourg’s famous Gothic cathedral, the Christkindelsmärik has a three-meat stew on offer in its market, an ice rink and La Petite France – a chocolate box/movie set collection of cute Hansel and Gretel buildings. What more could you possibly want out of a holiday?

Check out some last minute deals for Strasbourg here

Apparently the Austrian capital is host to 300 balls over Christmas, and although I have no idea how one gets oneself invited, or if it’s something the peasants can buy tickets to, there is plenty else to do if you were relieved to leave Strictly at home. There are Christmas markets – surprise! – a giant cathedral – surprise! – and beautiful light shows. Surprise! You can also visit Weikersdorf Castle on Christmas eve for a bit of history, and, if you’re there for New Year, do a traditional Viennese Walz with your beloved at midnight. Maybe go somewhere else if you’re particularly anti-Strictly.

Check out some last minute deals for Vienna here

Berlin is arguably the city that’s shaped Europe more than any other. In one trip you can travel the length of World War II and the Soviet Union, and not once is the city overwhelmed by its past. Instead, modern Germans get on with having super-efficient super cars and brilliant food while the rest of the world makes terrible Hitler jokes. The rest of the world is missing out, yes?

Check out some last minute deals for Berlin here