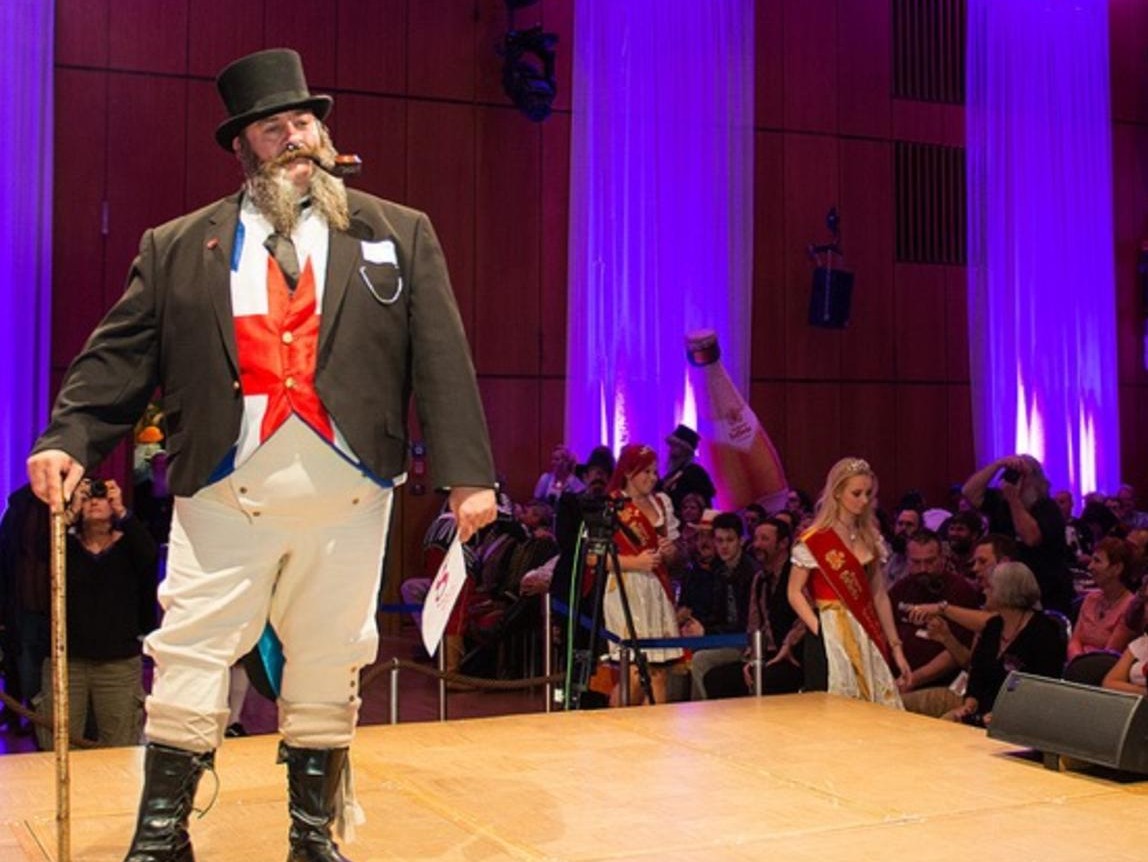 We recently heard about an incredible bearded story from a gentleman named Michael Wallage, a muttonchop beard champion who has an incredible story to tell.

Read his story below:

Prior to this I was at the gym 5 days a week, a HGV1 driver for TNT and worked on the doors every weekend at local pubs and clubs. I had even strutted my stuff in a pair of nicely painted brown Speedo`s in a few body building competitions.

All that came to a very sudden end July 23rd 2004. Over the next few years I underwent several major operations to rebuild my shattered legs, at one point an above knee amputation was mentioned. As is the case with many people who suffer life changing injuries I sank into what can only be described as a pit of depression. My world as I knew it then had ended. I sat and vegetated in front of the TV, my weight ballooned and the physique I`d worked so hard on for nearly 17 years was gone. I found myself looking at the bottle of pain medication one day. That was the day I decided I had to do something with my life and stop feeling sorry for myself.

A few weeks after that I watched a program on the TV called Whisker Wars, that was the epiphany moment. I`d seen Paul Teutul, Sr. on Orange County Choppers, his style moustache appealed to me so off came the goatee I`d had for over a decade and then came the tash.

As it grew, I started to join a few “Beardy groups” on Facebook, joined The British Beard Club and even entered The British Beard and Moustache Championships 2012. I then realised that my style Moustache didn`t really fit into any of the categories, so I sought the advice of David Dade, president of TBBC who suggested I grow the sides in and go with the Sideburns/Muttonchops.

Life has a habit of getting in the way of things and I wasn’t able to make the championship. I trawled the internet looking for a suitable “show stopping outfit” for my first competition. Finding clothes that fitted had always been an issue due to the body building. One day I stumbled across an image of John Bull the Victorian the quintessential portly English gentleman.

I had the Tailcoat, union flag waistcoat and breeches made locally, bought some authentic Victorian style riding boots on the internet and Michel John Bull Wallage a.k.a. The Fat Lad was born.

My first character outing was down in Yeovil, held by The Wessex Beardsmen. My body confidence issues got the better of me, I had lost all stage confidence, It didn’t help that the then British Chops champion, Michael Bates was competing either. A bit of a pep talk from some close friends did the trick and I walked on the stage like I owned the place. I beat the British Champion on my first attempt and have since got on to take the following titles:

I have been lucky with my sponsor support: Beardilizer and The Dapper Duke keep me supplied with amazing beard care products and who help me with the costs of competing at events all over the world. Later this year, I`ll be taking part in Whiskermania in Louisville, held by the Derby City Whisker Club and also travelling to Leogang, Austria to take part in The official World Beard and Moustache Championships representing The British Beard Club and as a member of The Beardilizer Beard Dream Team.

Who`d have thought it eleven years ago as I lay in the road that this would happen? Along the way I have made some great friends and met people from all walks of life.

Unfortunately I have also lost some friends who have sadly passed away. One of the great Beardsmen who made such an impression on me was Eddie (Edwin) Venn. Ed competed at the British Championships in Bath last year, he came to the competition direct from his hospice bed, competed in the biggest category of the day (Full Beard natural over 12″) and placed 2nd. Sadly he passed away shortly after the competition.

It was the loss of Ed that made me want to do something to raise awareness of and raise some cash for CRUK. I`ve decided that being this size isn`t helping me or my legs and it`s now time to do something about it. I plan to shed ten stone, and I`ve started a Myproject page for CRUK and hope to raise in excess of £1000. Details of my project can be found here – http://myprojects.cancerresearchuk.org/fundraise/fundraising-pages/michael-john-bull-wallage-aka-the-fat-lad-loosing-it-for-cancer-research.

That`s the story up to now, myself and a good friend, Guy Farley, the demon beard barber of Derbyshire are working on freestyling these Chops, so who knows where we`ll go, Imperial, freestyle partial, but my favourite style will always be natural Muttonchops.

Check out some more photos of Michael below. 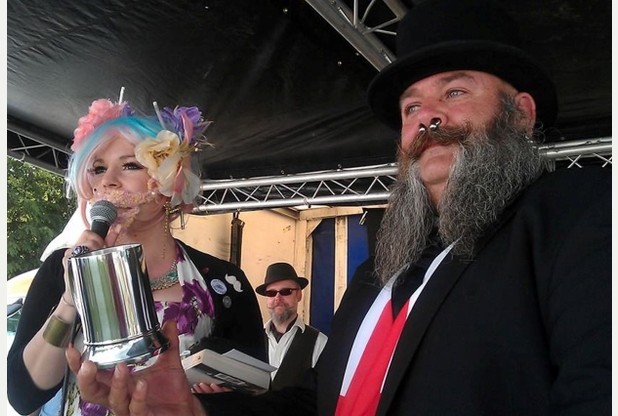 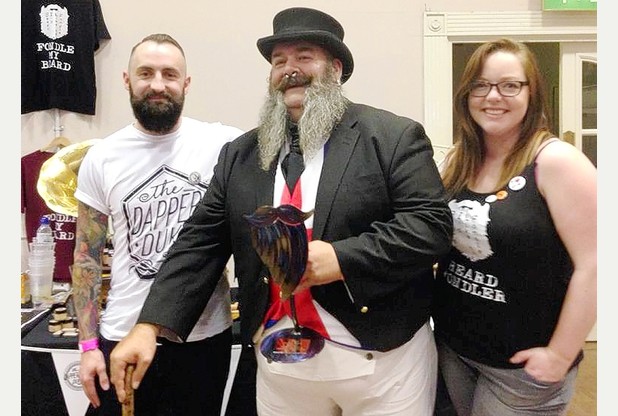 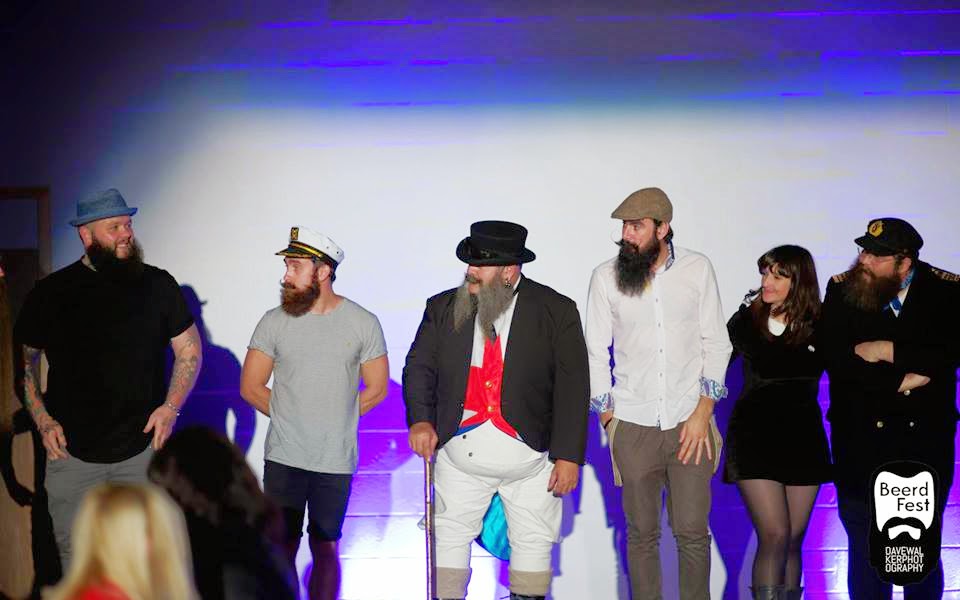