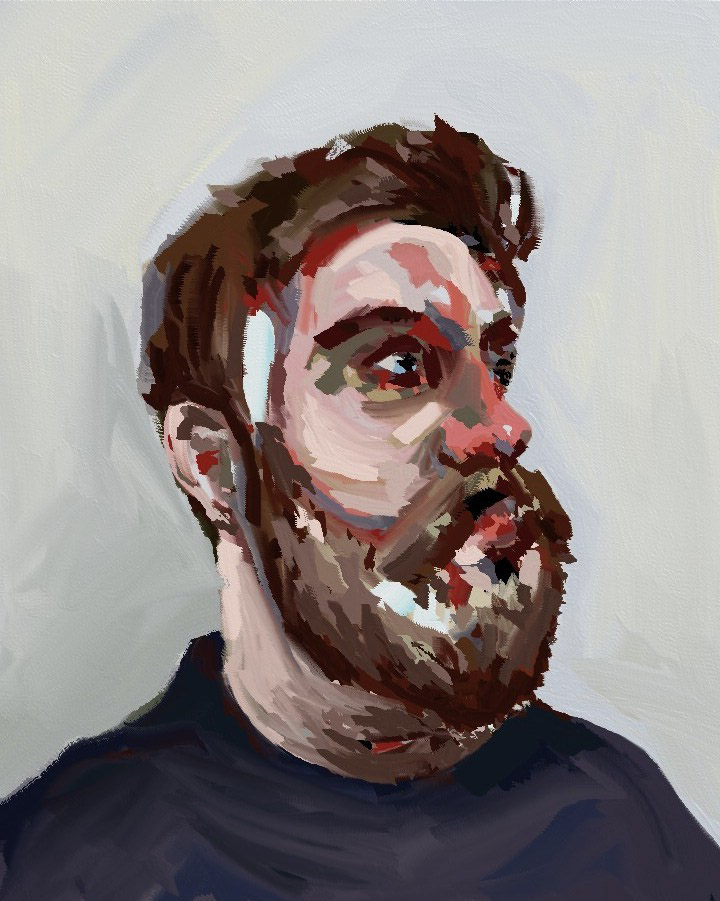 We got the chance to catch up with digital artist Phil Galloway, learning more about his craft and how it feels to be beardie as well as artsy. Read his interview below.

You’re a bearded fellow, Phil- how long have you been cultivating that facial plumage?
Since I was able to, I’ve pretty much always had some form of whiskerage. All I wanted as a boy was to be able to grow one after looking at and listening to old 60’s and 70’s music like The Beatles and The Dubliners albums. Some of the early efforts, to be fair, looked like single iron filings stuck to a pale potato, however in the last ten years it has come into its’ own and matured a tad. This current length and sustained growth has been with me for almost a year now.

What’s your take on this latest trend of the beard returning to chins of the men of today?
Having been a bearded fellow for the past decade it was initially quite a relief to see so many other hirsute brothers padding about. However, I don’t like to think of my beard as a fashion item, more so a way of life and that is where I am loathed to be lumped into the new fad hipster category. I appreciate the more simple old school values of dapperness, pomade and oils along with having a decent barber chop your hair rather than a soulless salon!

Phil, are you a beard product user or do you prefer au naturel?
I am, because like the hair on your head, the beard still needs maintaining and looking after. I don’t like to preen my beard too much, but do like my new Sartorial Beard Oil by Penhaligon’s. I’ve had the Sartorial aftershave before and loved it and its rich unusual scent, and the beard oil is no different, only now it keeps my fuzz looking shiny and feeling smooth for the day. Other than that I just use a simple beard comb in the morning to detangle, shampoo and condition every now and then and sometimes apply the odd dash of either Penhaligon’s moustache wax or just simply a dot of Black and White Hair Wax through the tache to shape or curl.

So, you’re a digital artist? What’s that?!
Well I’ve always been a doodler in more traditional mediums such as pencil, paint and ink etc. and still work in these occasionally, but it is digital art that seems to have garnered the most positive response on the internet and the one I am mainly pursuing at the moment. Digital art, I suppose, is any visual piece of art which has been created using digital technology such as computers, phones and tablets. For me this means using my Lumia mobile phone or Surface Pro 3 tablet along with an amazing app called Fresh Paint to create portraits and still lifes.
The app recreates oil paint, it’s flow and the malleable quality of paint unbelievably well and for a traditional artist coming to the new medium, it felt exceedingly natural to use. I’m not ever trying to fool people into thinking my digital pieces are actually real paintings (although it has many times!) rather I am now trying to push what digital paint can achieve and use it no differently to real paint and brushes.

When you’re being all arty and doing portraits, are beards tricky to draw?
I like depicting rugged figures and different styles of beards but they are certainly tougher to draw in pencil than in digital paint, as I tend to draw in a very tight realistic manner doodling every hair and strand on the beard. However, with the digital paint I am far looser and more expressive with my strokes which, although still need reigning in and controlling, makes for a quicker execution of the beard.

Describe your beard in three words:
Full. Of. Nutella.

What’s your ‘beard plan’? Gonna keep it? Shape it?
I’m definitely going to keep it, I’d look like a pasty teenage choir boy if I shaved it, so no way this is going! It terms of ‘shaping’ I will keep avoiding any notion of over-grooming and becoming Craig David (although chilling on Sunday does sound good these days!). And as for my ‘Beard Plan’ I’ll probably discuss ideas with my awesome barber Paul at Bromley’s Barber Shop in Chester, a true male sanctuary![/fusion_text][map address=”CH1 2HT” type=”roadmap” map_style=”default” overlay_color=”” infobox=”default” infobox_background_color=”” infobox_text_color=”” infobox_content=”Bromley’s Barber Shop” icon=”” width=”100%” height=”300px” zoom=”14″ scrollwheel=”yes” scale=”yes” zoom_pancontrol=”yes” popup=”yes” class=”” id=””][/map][section_separator divider_candy=”top” icon=”” icon_color=”” bordersize=”1px” bordercolor=”” backgroundcolor=”” class=”” id=””][fusion_text]What’s your biggest achievement so far in your doodling career?
Up until late last year I had never won an art competition. Now, this was mainly due to my dearest mum loving me and my brother’s art so much that she couldn’t bear to post it off to the likes of Blue Peter, and so secretly kept them in a box never to be entered! However this all changed when, after a very random route into getting my new mobile phone, I won the Microsoft/Nokia @Connects Most Valued Connector competition on the theme of Digital Painting. This moment of recognition has opened the door to me creatively and introduced me to so many unreal opportunities, such as starring in a Microsoft Digital Art viral campaign along with being asked to film an introduction to Microsoft’s Conference at Mobile World Congress 2015 in Barcelona earlier this month. It has als0 introduced me to the wonderful community involved in Windows and Nokia phones. These guys are so supportive and passionate, it truly has inspired me to keep creating and to begin realising my dream of becoming a professional artist.

What are you looking to do in the future?
My dream has always been to become a full time artist and this is no different now. However, I can add to this writer, reviewer and presenter as I have thoroughly loved having the opportunity to do these things about my art and the technology over the past few months. If I could earn my living doing a combination of these things and produce art that makes people happy or inspires to create something themselves then I would be a content hairy man.

Best beardie tip for our readers?
Be bold, stay strong and don’t give in to the wicked call of the razor. For the beard is always fuzziest just before the manly dawn.