A Man’s Guide to Choosing and Wearing Rings 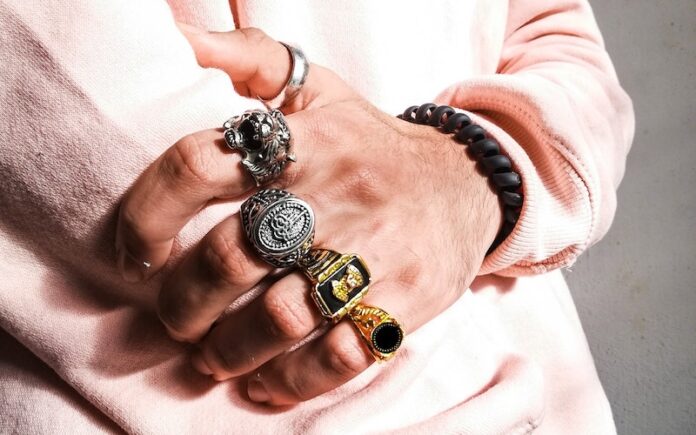 For pretty much all human history, rings have been worn by women. Although there is nothing inherently problematic about rings, many modern jewelry styles may not suit most men.

When criticizing men’s rings, most people argue that it is too feminine or too flashy. However, in both cases, the problem is not with the presence of the ring but with its design.

Before you settle on a particular ring, there are several factors you need to understand.

Although common today, only wives wore wedding bands before the Second World War. This was more about patriarchy and less about romance. It was proof that a woman had a man to look after her, and her children were legitimate.

They were forged for soldiers overseas from non-precious metals during the war to remind them who they were fighting for. However, it wasn’t until the 1960s that they became popular as jewelry.

The change was fuelled by a wave of feminism and the rise of European fashion. Today, the varieties range from intricately designed Men’s Antler wedding rings to simple bands.

Signets were worn by Ancient Egyptians and were used to authenticate official documents. On the other hand, they were engraved with a family crest to stamp letters in Britain.

Traditionally, you had to possess a coat of arms to engrave on your signet since it signified plush roots and were family heirlooms.

However, the signet lost its significance by the 19th century due to the emergence of new money types that could be used to purchase heraldry. Modern signets come with all manner of designs.

Despite being rare, they are usually worn not for aesthetics but tradition. They can range from something with a story that you bought cheaply to expensive designer bling. Since they are an expression of character, they can be worn alone or in multiples or on any finger.

You can categorize rings into ones with a specific cultural message, purely decorative ones, and those that do both simultaneously.

Few major world religions require the wearing of rings. However, some promote them for relationships or specific roles.

Although it has evolved into a cultural practice with a lot of symbolism, the Western wedding band is the most common example. You can work cultural rings to fit your personal preferences.

For instance, married men with silver bands often accessorize them with other silver elements such as earrings and belt buckles.

For thousands of years, rings have signified group and family membership. The most common examples are class rings, the occasional family crest, and fraternal rings.

Besides being considered cultural due to their membership or belief, they are usually decorative. As a result, they feature larger bands and designs and more eye-catching detailing than wedding bands.

Although most men wear them to be noticed, they are a door-opener for men in some fields. If you are looking for one, go for a big, bold, chunky ring, mostly with one metal color.

The purpose of a family ring is to remind the owner about his family’s history and something special or unique about it. It might be forged from a particular metal or in a specific shape with personal significance.

It might also have belonged to a beloved ancestor. Although it can be helpful, it does not matter whether the story behind the ring is evident to strangers. Its primary purpose is to connect you to your family.

For most men, wearing a ring other than a wedding band is a statement. When shopping for a ring, ensure that you choose one that fits your style. Since there are many options available in the market, you must research before settling on one.