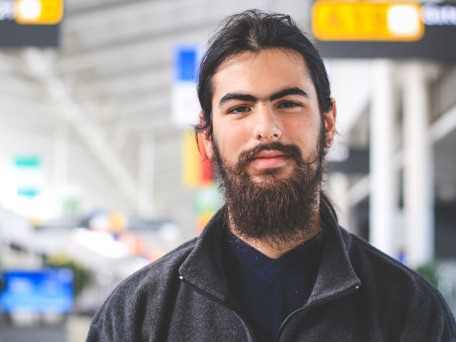 I started growing my beard after I had quit my job working at a fast food restaurant. I had worked there in high school for a little bit and I just wanted to grow a beard. It was my first time ever that I thought I could grow a beard so I just let it grow. I know there’s like a myth about shaving it—maybe it grows faster, but turns out that the only way to tell was to just not shave it at all for a few months. So my first year of college I went, maybe, six months without shaving it. And it got pretty long but not where I wanted it, so I kept shaving and I had different kind of jobs and I had to keep shaving it on and off. And that really kind of angered me so I ended up growing it out throughout the whole year and decided not to shave it at all once I got a job as a mechanic. Then I kept growing it throughout that job and then decided that I didn’t want to do that anymore and I’d saved up enough money to travel abroad so I went to Spain. [I] kept growing the beard there, and my whole point was to get as natural as possible. So just not to shave, not to take showers as often, that kind of thing. So then now I came back, maybe a month ago, and I’m still growing the beard.