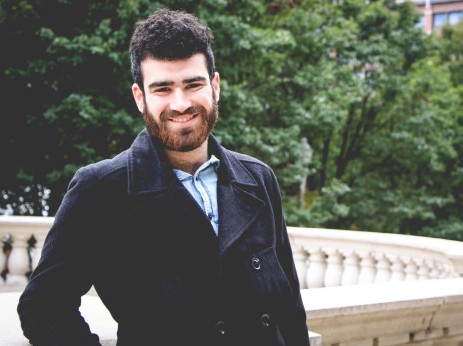 Part of it is laziness from shaving, but I also like it. It makes me look older, which I like because I spend a lot of time with people who are significantly older than I am and I’ve always been very mature for my age. And I’ve sort of grown into it and grown to like having it more. It’s about as long as it’s ever been, but one of the things that I think is really cool is that it turns sort of reddish when it grows out which is strange because I don’t know why that happens or where it comes from. But I like it. A lot of people have been saying that they like it. They notice the red in it, they say that it looks good on me. And what’s really cool, is that everyone’s like, ‘So, do you have to trim it and keep it in shape?’ And I don’t. I don’t have to do anything. It just kind of is what it is, and I just go with it. Beards are in. Guys like it, that’s nice. So yeah, it’s nice. I like looking at my face and seeing the beard. It’s kind of nice to have that about me.