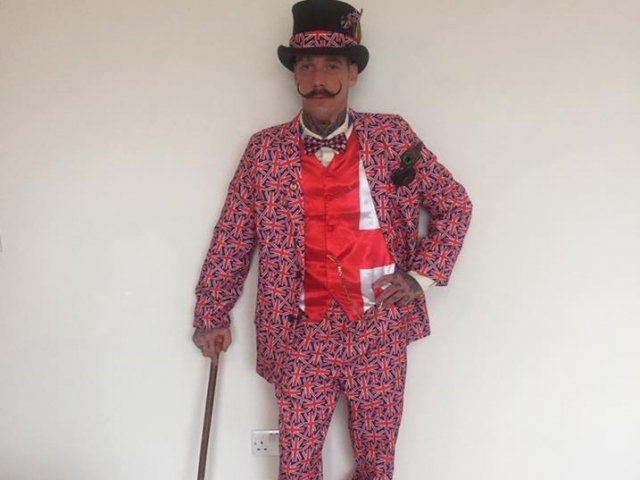 The British Beard and Moustache Championships took place on Saturday, October 15 at St George’s Hall, Liverpool. It was an incredible event hosted by the Liverbeards and supported by The British Beard Club and the Handlebar Club.

We are delighted to announce that Coventry tree surgeon Russell Bristow won second place in Handlebar Moustache category, he has been a great supporter of TheBeardMag for some time now.

Competitors from across the country packed into St George’s Hall on the middle weekend in October with their finest facial topiary on display.

Throughout the year Russell has won awards at various events including Oxford Beardfest, Central Beardsman and the Devon and Cornwall Beard and Moustache Championships.

Donning a Union Jack suit for the occassion, Russell entered the stage for judging to great applause from his fellow competitors. He said

“Winning this award has topped off an epic year. I have had a great time and met some brilliant people along the way. I’m really proud of my moustache so being recognised as having the second best handlebar moustache in Britain is amazing! I am really grateful for the support I have received from my sponsors FuzzMuzzle beard products”

Stay tuned for a ‘Beardsmen‘ Interview with Russell, coming soon! We do not own the images in this post, they are owned by the talented photographer Iain Crockhart.

Check out the rest of the winners and runners up, courtesy of the team at The British Beard and Moustache Championships.