To Beard Or Not To Beard? 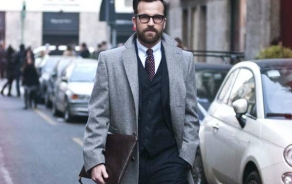 Ever wondered how as a salesman, having a beard affects purchasing decisions? This short article and infographic look at the how presentation is everything.

Looking to make a good first impression? Then grow a beard! Sported by actors – think Brad Pitt, TV celebrities – Paul Hollywood – ‘The Great British Beard off’ perhaps – and ‘The Beard’ himself – Shakespeare, they are one of the most popular accessories in men’s fashion at the moment.

While the appeal is widespread does it also apply in a more commercial environment? Lookers, one of the UK’s most popular car retailers, recently put that to the test. Presenting a number of people with 8 random pictures of salesmen they asked the question ‘Which of these sales professionals are you most likely to buy a car from?’

The results themselves were a close shave. Least likely to appeal to customers were those who were either clean shaven or sporting stubble of any kind – designer or otherwise. And at the other end of the scale unruly, unkempt beards – think Lumberjacks – were about as popular as razor burn.

Meanwhile, by a few whiskers, the sales person who topped the poll was the owner of a well-groomed, tidy beard.

And the reason for this result? Well, according to psychologists bearded men are considered ‘more confident and mature’ which can certainly help when discussing the merits of any car.

Drop into your nearest Lookers dealership to see the wide range of beards on display. And while you are there, why not also look at the incredible range of cars too!

This article and Infographic is courtesy of – Tracey McBain.