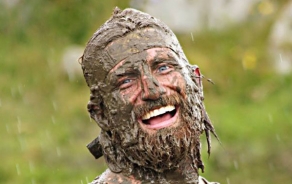 We challenge the recent news article that beards contain traces of excrement, is this a legitimate claim or just a marketing stunt to help sell more razors?

I probably shouldn’t publically admit that I don’t keep up with every beard-related news story, but when my boss asked me to write something about ‘the recent poo and beards theme’ I thought I’d misread the email and I really, really didn’t want to Google it.

Because, if you’ll pardon the pun, there is no reason for that shit to be near your face. Not if you wash your hands the way the rest of us do, anyway, and I have been learning that you bearded dudes are really quite careful about personal grooming (I will never not link you back to that article because the comments keep coming and they’re excellent).

But apparently there’s been a flurry of news regarding a study discovering that some beards contain similar bacteria to those found in human excrement. Gross. One assumes that’s because some people are completely incapable of washing their hands properly and one assumes that one day it’ll catch up with them and give them the lurgie… one hopes they haven’t kissed anyone in the meantime.

But wait. This news story, which has in some circles probably prompted hand and beard washing to rival the foot and mouth epidemic, isn’t really true.

Mostly because the ‘study’ consisted of a New Mexico news anchor swabbing some beards, sending the samples to a microbiologist and repeating the findings that beards contain bacteria with slightly more enthusiasm than necessarily warranted a pseudo-study for local news… then of course it was picked up by every reporter who needed to fill some space with something that wasn’t about the UK election or ISIS – and everyone loves a story about illnesses, especially if they also let the journalist shit on a trend. Pun fully intended. (I love this topic.) Here is the original news piece:

Ultimately, there’s bacteria everywhere – and it’s good for us. This piece discusses a few good, legitimate studies about the relationship between beards and bacteria and this helpful article lists where else one can find faecal bacteria. Here’s a clue: everywhere. While there is absolutely no excuse for not washing your hands with soap and water, and while you should probably wash your beard as regularly as you do your hair – in order to remove all the visible crap in there if nothing else – you don’t need to shave your neck over this.

Unless you agree with the anchor that the ‘beard revolution is at its peak’ and want to quit while you’re ahead, anyway. The rest of you can all continue with your trendy bearded lives wearing clean(ish) – wait for it – shit eating grins.