What happens when you mix a bearded man with beautiful cupcakes? You get ‘Mr Mom’s‘. Gavan Knox has a passion for cupcakes and unusual flavour combinations. Read his story below –

I’m a dad, a gay dad, and I love baking. In fact I love it so much that I quit my office job, started my baking business, “Mr. Mom’s” and now I’m hoping to turn my passion for cupcakes and unusual flavour combinations into a book. I have always loved baking- it’s got a long history within my family so I am no stranger to the kitchen. One look at me and this would be quite apparent! Growing up in Ireland, as the youngest in a family of six, the kitchen was very much the hub of family life and this has stayed with through my twenty-somethings and now into fatherhood.

I left my native Ireland in 2002 and moved to Manchester where I worked as an architectural technician. I met my husband after 4 months and two months later moved to London, moving in with him. After being together for 9 years, my partner and I adopted two children in 2012 and we decided that I would take leave from working in an architecture to help with the settling in period. I ended up taking the adoption equivalent of maternity leave (that was a learning curve!) with a year off to help our new family get settled in. It was during this period that I came “flex my baking muscle” as it were- remembering tips and tricks that I had learned at my mother’s hip. Cupcakes became a favourite for me- both in the sense of pushing the flavor envelope and in trying to break the “stigma” around men baking them. Creating flavour combinations that are little more “outside of the box” is something I love doing, as well as championing that cupcakes can be created and enjoyed by men. You can’t get more “manly” looking than a 220lb, bearded dad of two! 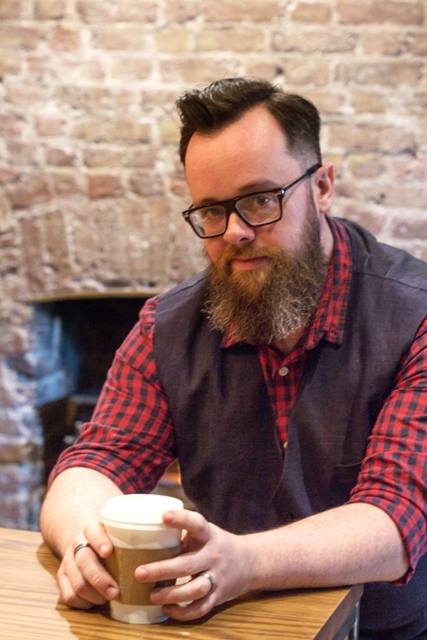 I came up with the name “Mr. Mom’s” whilst looking through social media feeds one Mother’s Day. There were various messages and well wishes mothers. However, I remember seeing a message in connection with familys with gay dads which read, “Happy Mother’s Day to all the mom’s out there, but let’s not forget the Mr. Mom’s too”. As a gay dad this resonated with me and it stuck. And so my business name “Mr. Mom’s” was born. The #thebeardedbaker has become a reference hastag for me on my social media feeds amongst my followers. I guess you could think of baking world’s answer to The Hairy Bikers.

Since starting Mr. Mom’s in 2013, I’ve grown from supplying friends and family to paying customers and businesses. Up until it closed in early 2014, I supplied Wallace & Co. restaurant and café in Putney (one of Greg Wallace’s ventures) with their cupcakes, supplying an average of 12 cupcakes on a weekend basis, which increased to an average of 36 during the seasonal periods. I’ve also provided for events such as The Food Exchange run by Enterprise Nation, and NHS South London and Maudsley Mental Health Foundation. For the NHS event, I themed cupcake flavours around the aspect of beneficial “brainfood” ingredients. Some of the flavours included a Matcha green tea sponge with blueberry compote center, Matcha green tea frosting and topped with raspberries and goji berries; another flavour was a cinnamon & vanilla sponge with an apple puree centre, caramel buttercream frosting and topped with a caramel apple slice. All went down a storm by all accounts. 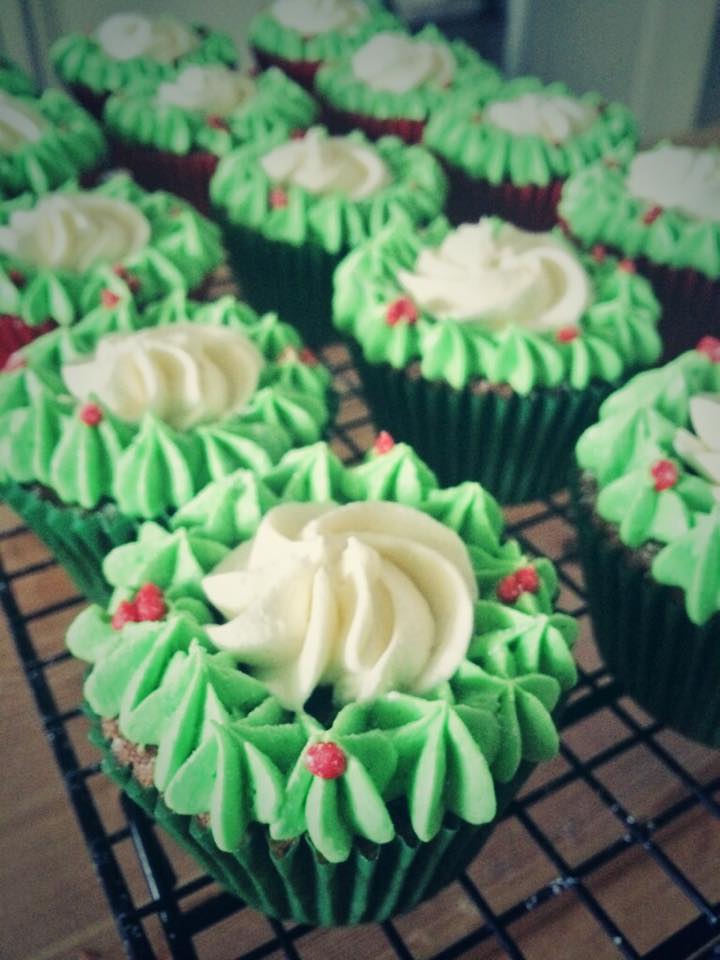 Last year I worked in partnership with the charity Beating Bowel Cancer on their Decembeard campaign. For this I created a range of cupcake and brownies theme running in tandem with the campaign’s strapline of “#realmengrowbeards”. Both baked goods and recipes were available for sale with a portion of the sales going towards the charity. Cupcake flavours drew inspiration from styles of beard, eg The Van Dyke was based on the Flemish painter’s beard, so the cupcake ingredients included Belgian chocolate and beer. Brownie flavours were themed on an almost clichéd 80’s image of a man (think Patrick Swayze or Chuck Norris)- they were packed full of ingredients and of ample “manly” portions!

I’ve been a regular contributor to the online baking magazine “Brilliant Baking” with both my recipes and articles, appearing alongside the likes of Peter Sidwell; Peggy Porschen and Will Torrent.

I’ve also been covered in the regional South-West London magazine “Resident’s Journal” a number of times in connection with my cupcakes and brownies. I’ve also had articles on featured in Gay Times and We Are Family magazines on the subject of adoption and being a gay dad.

2014 saw an increase for Mr. Mom’s profile in the public eye. In October I was awarded Best Reader’s Recipe for my “Smokin’ Pig Licker Brownies” in The Observer Food Monthly Awards 2014, with my brownies served on the night and the recipe appearing in the awards supplement. Later that year I was placed as finalist in two professional categories of the National Cupcake Championships. 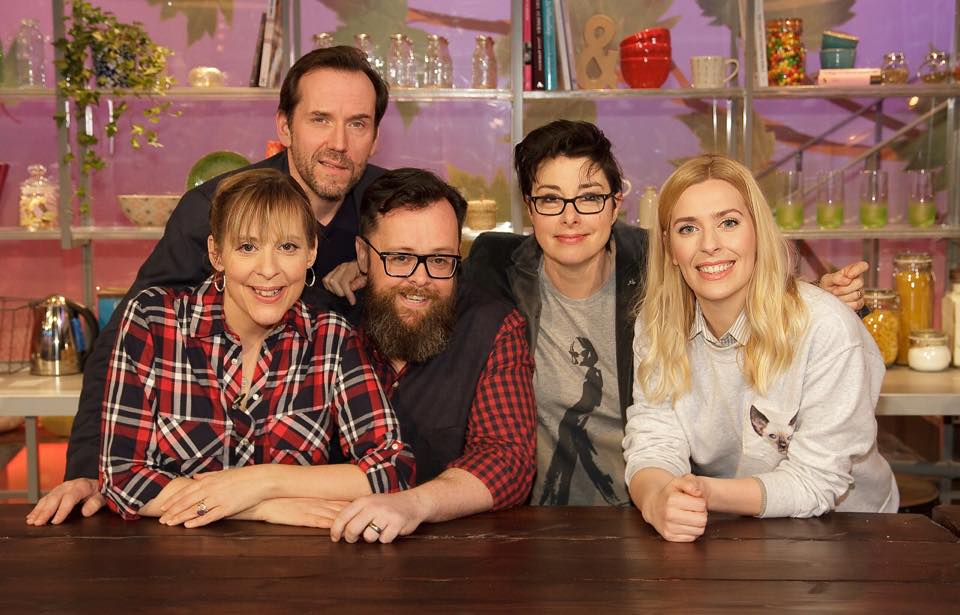 “The Bearded Baker” got off to an excellent start in 2015 with a feature slot on Mel & Sue’s afternoon show on ITV in February, baking my “Blueberry; Coriander and Black Garlic” cupcakes- a cupcake flavor twist typical of what I do at Mr. Mom’s. It was also around this time that I was engaging in “little friendly competition” with Kitty Hope (of Hope & Greenwood).

After some Twitter banter we challenged each other to come up with a bake based on the suggested (unusual) ingredient of black garlic. Organized by the PR company, Taste PR, the final bakes were to be judged impartially and blindly by Lily Jones (of Lili Vanilli). I took it as quite a coup when my cupcakes were declared a winner. The winning recipe was Matcha green tea & black garlic cupcakes, with plum wine frosting, topped with a black garlic and black sesame seed marshmallow and a candied black garlic clove “dart”. I’m happy to say that the resulting victory has led to Hope & Greenwood becoming clients of Mr. Mom’s, with discussions taking place as to working together on future projects.